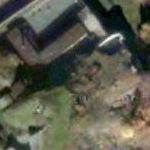 Between February 1894 and October 1897, two separate forts were constructed: one at Macaulay Point (site of earlier earthwork batteries), and an entirely new location at Rodd Hill, a bluff of rock overlooking the western side of the narrow entrance to Esquimalt harbour. Both forts would each mount three 6-inch disappearing guns (Mk VI barrels on a Mk IV mounting). Because of limitations of space in Rodd Hill, two of these guns were mounted with a common magazine in "Lower Battery," while the third required a separate battery (along with an underground magazine, loopholed wall, water supply, guardhouse, etc.) on another, higher hill some 200 meters away, named, logically, "Upper Battery.""
Links: en.wikipedia.org
492 views