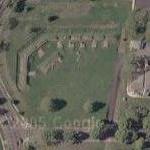 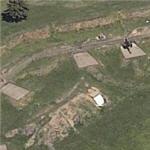 Fort Stevens, now partially restored and located at 13th and Quackenbos Streets, NW, was built to defend the approaches to Washington from the 7th Street Pike (now Georgia Avenue) which was then the main thoroughfare from the north into Washington. Originally called Fort Massachusetts by the soldiers from that state who constructed the fort, it was later named after Brigadier General Isaac Ingalls Stevens, who was killed at the Battle of Chantilly, Virginia, September 1, 1862.

By noon of July 11, Confederate General Early came in full view of Fort Stevens, reconnoitered the area and found the fort poorly manned. During the afternoon of that day, General Early tried to find a weak spot in the line, but was met everywhere by fort guns and musketry. Supporting Fort Stevens were the guns from Fort DeRussy on the left and Fort Slocum on the right. When examining the works at daylight on July 12, Early saw the parapets lined with seasoned troops; he then decided to abandon the idea of capturing Washington, but planned to give the Yankees a fight anyway. By nightfall of July 12, the Rebels were sent into full retreat, and the Union Capital had been saved.

On July 12, President Abraham Lincoln went out to Fort Stevens with his wife and other officers and stood on the parapet calmly watching the battle. The Battle of Fort Stevens thus marks the only battle in which a President was present and under enemy fire while in office.
Links: www.nps.gov
906 views