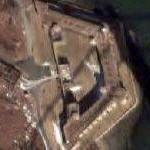 Fort Wadsworth: 1900, Staten Island. The oldest continuously manned military installations in the US at its closure in 1994. The site was first fortified with a 1663 blockhouse and then during the Revolutionary War as the American redoubt Flagstaff Fort (1776), taken by the British it was enlarged and used to 1783. NYS started masonry fortifications of Lewis, Richmond (Battery Weed), Morton, Hudson, and Tompkins in 1806 that were used in the War of 1812. Improvements were made to Forts Richmond and Tompkins in 1860s based on 1840s recommendations of CPT R.E.Lee. The entire complex of Forts and Batteries was consolidated as Fort Wadsworth, named for Brig Gen James Wadsworth killed in the 1864 Battle of the Wilderness. By 1900 new "disappearing" carraiges and breach loading 12" guns with massive concrete walls were installed and some destruction of the original sites were done by those upgrades. Status of Batteries in 1921 were as follows;

By 1924 (coastal defense had moved to Fort Tilden) it was an infantry post and its coastal guns were cut up for scrap during WW2. 1955-74 Headquarters of the 52nd AAA Brigade, responsible for Nike-Atlas AAA activities of the New York City area bases and New Jersey north of Fort Hancock. Later site of the US Army Chaplain School and then Headquarters Naval Station New York. The site was closed in 1994.
Links: dmna.ny.gov
767 views