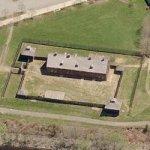 By mlc1us @ 2010-05-11 12:47:04
@ 44.31586406, -69.77130266
Augusta, Maine (ME), US
Fort Western was a colonial outpost at the head of navigation on the Kennebec River at modern Augusta, Maine, United States. It was built in 1754 by a Boston land company (the Kennebec Proprietors) to promote settlement in the area. The fort was a log palisade with blockhouses which protected a store and warehouse. It was never directly attacked. In 1775, Benedict Arnold's expedition stopped here long enough to build bateaux. Arnold, Daniel Morgan, Roger Enos, and Aaron Burr stayed as guests in the garrison, while their force camped outside. Fort Western was viewed as the starting point for their march through the wilderness.
Links: en.wikipedia.org
819 views