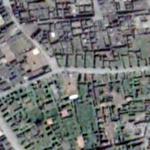 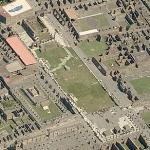 By Effi @ 2007-03-30 01:57:33
@ 40.749625, 14.484583
Pompei, Italy (IT)
The first monumental arrangement dates from the 2nd cent. BC, with a few buildings and the porticos with their double row of tufa columns, replaced with white limestone in the imperial age, when the site was repaved and buildings added on the east side where shops had previously stood. Located at the intersection between the two main streets of the original urban center, the Forum was the city's main square, where cart traffic was forbidden: it was surrounded on all sides by religious, political, and business buildings. In the 1st cent. AD the Forum highlighted the celebratory intention of the imperial house, where the monumental bases for commemorative statues were placed on the south side, in front of the city's administrative buildings, while those of illustrious citizens stood along the porticos : the sculptures have not been found, perhaps because they were removed by the people of Pompeii who returned after the eruption to take whatever they could. In the center of the western side stands an orators' tribune.
Links: www.thecolefamily.com
2,437 views