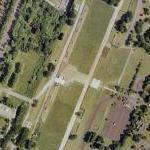 By kjfitz @ 2009-12-30 09:26:02
@ 51.421564, -0.074045
London, United Kingdom (GB)
The Crystal Palace was a cast-iron and glass building originally erected in Hyde Park, London, England, to house the Great Exhibition of 1851. More than 14,000 exhibitors from around the world gathered in the Palace's 990,000 square feet of exhibition space to display examples of the latest technology developed in the Industrial Revolution. Designed by Joseph Paxton, the Great Exhibition building was 1,851 feet long, with an interior height of 108 feet.

After the exhibition, the building was moved to a new park in a high, healthy and affluent area of London called Sydenham Hill, an area not much changed today from the well-heeled suburb full of large villas that it was during its Victorian heyday. The Crystal Palace was enlarged and stood in the area from 1854 to 1936, when it was destroyed by fire. It attracted many thousands of visitors from all levels of society. The name Crystal Palace (the satirical magazine Punch usually gets the credit for coining the phrase) was later used to denote this area of south London and the park that surrounds the site, home of the Crystal Palace National Sports Centre.

Despite attempts to revive The Crystal Palace, on 30 November 1936 came the final catastrophe, fire. Within hours the Palace was destroyed: the flames lit up the night sky and were visible for miles.
Links: en.wikipedia.org
749 views