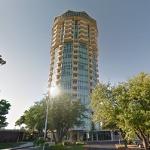 By jbottero @ 2013-11-17 18:29:21
@ 35.530719, -97.570918
Oklahoma City, Oklahoma (OK), US
The United Founders Life Tower was built by the real estate development arm of the United Founders Life Insurance Corporation. In addition to being the primary tenants of the skyscraper, the company expected to profit from the development of the mostly rural land surrounding the tower. When it was completed in 1964, the Founders Tower was the first skyscraper to be built in Oklahoma City outside of downtown. Its relatively isolated location in northwestern Oklahoma City and its unusual design spurred the development of the area. At the time the Space Needle inaugurated the first revolving restaurant in the United States at the World's Fair in Seattle, the design of Founders Tower was the first one changed to incorporate its own revolving restaurant in the United States. Founders Tower is one of only three office buildings in the U.S. to include a revolving restaurant.

It was purchased by 1978 by Northwest Investors Limited for $15.5 million; Northwest Investors also received a $5.8 million loaned at the same time. The building was sold in 1981 for $11.1 million to California-based National Capitol Real Estate Trust in 1981, with Northwest Investors retaining 25 percent ownership. The building was certified as a nuclear fallout shelter by the United States Army Corps of Engineers in 1983. United Founders foreclosed on Founders Tower in 1986 after National Capitol defaulted on loan payments for the remaining $4.92 million. It was sold at sheriff's sale on November 5, 1986 to the Protective Life Insurance Corporation, the parent company of United Founders. The tower was sold on April 24, 1989 to the U.S.–Swedish investment group, Growth Fund International Limited for $2.5 million. In 1996, Founders Tower was sold to Hebron Corporation, a subsidiary of the long-distance calling provider AmeriVision, for $3.3 million.

In 2005, Founders Tower was purchased, along with 7.5 acres (3.0 ha) of surrounding land, for $4.6 million by the Bridgeport Development Group. The next year, a $50 million renovation, to convert the office building into condominiums and to reverse the 15 years of neglect from the constant buying-and-selling by out-of-state investors, was announced. At the same time, the building was renamed "The 360 at Founders Plaza", a reference to the view from the building and its revolving restaurant. During the renovations from 2007 to 2008, the building's original, darkly-tinted, glass panes were replaced with modern, energy-efficient, turquoise-colored glass. The building's name was returned to Founders Tower in January 2010. It was listed on the National Register of Historic Places on March 13, 2013.
Links: founderstower.com, virtualglobetrotting.com
491 views