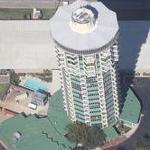 By kkeps @ 2013-11-17 17:18:48
@ 35.531596, -97.571369
Oklahoma City, Oklahoma (OK), US
Founders Tower, formerly known as the United Founders Life Tower and The 360 at Founders Plaza, is a Googie-style skyscraper located northwest of downtown Oklahoma City in the U.S. state of Oklahoma. The tower is one of the most well-known landmarks in the city's skyline. It has a height of 275 feet (84 m) and 20 stories, with a revolving restaurant featuring 360-degree panoramic views of Oklahoma City on its top floor. Founders Tower was the second building in the nation to have a revolving restaurant—the first being at the Space Needle. The building was originally finished in 1964 as an office building, but was redeveloped into upscale residences. It was listed on the National Register of Historic Places in 2013.
Links: en.wikipedia.org
777 views