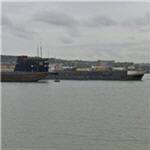 She was in active service with the Russian Baltic Fleet until April 1, 1994, having spent 27 years in active service.The vessel arrived in London from the naval base in Riga, Latvia, in July 1994 under the command of its Captain Vitalij Burda who bid official farewell to his second home for the last 23 years. She was at Long's Wharf, Thames Barrier untill 1998 and then moved to Folkestone.
Links: www.sovietsub.co.uk
945 views