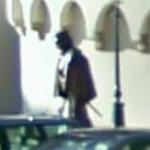 The statue shows Grimaldi dressed as a monk preparing to draw his sword.
Links: en.wikipedia.org
501 views