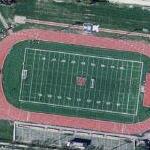 By kjfitz @ 2010-02-04 16:42:36
@ 38.647811, -90.313829
St Louis, Missouri (MO), US
Francis Field is a stadium at Washington University in St. Louis, currently used by the University's track and field/cross country, football, and soccer teams. It is located in St. Louis County, Missouri on the far western edge of the University's Danforth Campus. It was built in time for the 1904 World's Fair, and was used as the main stadium for the 1904 Summer Olympics. At its height, the stadium had a 19,000 person seating capacity, but 1984 stadium renovations reduced the capacity to 4,000 persons. It is one of the oldest sports venues west of the Mississippi River still in use. Francis Field has been upgraded to include many of the characteristics of modern stadiums. Instead of grass, the stadium now utilizes artificial Field Turf, which can be configured for both soccer and football.
Links: en.wikipedia.org
1,050 views