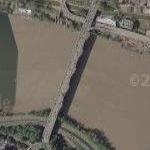 The Francis Scott Key Bridge, or, more commonly, the Key Bridge, is a reinforced concrete arch bridge conveying U.S. Highway 29 traffic across the Potomac River between the Rosslyn section of Arlington County, Virginia, and the Georgetown section of Washington, D.C. It was built by the United States Army Corps of Engineers between 1917 and 1923 and was named after Francis Scott Key, author of the Star Spangled Banner. The northern terminus of the bridge is just east of the site of Key's Georgetown home, which was later demolished; that site is now a community park honoring Key.
Links: en.wikipedia.org
1,043 views