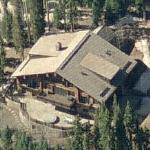 On October 30, 2012, Kennedy became the president of Lucasfilm and the brand manager of the Star Wars franchise after The Walt Disney Company acquired the company for over $4 billion.
Links: en.wikipedia.org
1,238 views