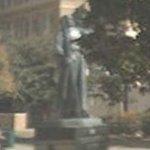 By WacoKidd110 @ 2011-11-11 18:18:40
@ 31.758563, -106.489046
El Paso, Texas (TX), US
Fray García was born in Old Castile, Spain and traveled to Mexico in 1629 where he became a Franciscan priest serving in the Province of New Mexico. In 1659 he established the Manso Indian Mission of Our Lady of Guadalupe at the Pass of the North, a strategic location on the Camino Real. This was the founding of the twin international cities of El Paso, Texas and Cd. Juárez, Chihuahua. The sculpture depicts Fray García in the act of building the mission; in his right hand he holds the lintel beam bearing the name of the mission and year of its founding. The Mission Grape represents European agriculture, which he introduced in the area. His original mission still stands in downtown Cd. Juárez.
Links: dnn.epcc.edu
673 views