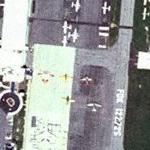 The Frederick Municipal Airport has long been a vital and necessary asset to the community. Aviation began in Frederick on August 21, 1911, when a flight to Frederick occurred. This historical cross-country flight was made in a Wright "B" Airplane piloted by Lt. Hap Arnold, which took off at 6:34 a.m. from College Park and landed in Frederick, Maryland at 7:23 a.m. Lt. Hap Arnold continued his career in military aviation and eventually became General of The United States Air Force. The co-pilot on the flight was Captain Chandler.

Construction at the present site of Frederick Municipal Airport began March 26, 1946, under the administration of Mayor Lloyd C. Culler. The first airplane to land in the grass at the new airport was a Stinson piloted by A.B. Sutherland on April 17, 1946. To build the Airport, the City received a number of federal and state grants to construct runways, taxiways and other facilities to support the Airport. The Airport was dedicated on April 27, 1949.
Links: www.cityoffrederick.com
922 views