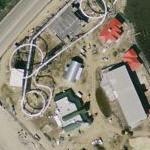 The park has been purchased by new owners, with the new name officially announced in a press release on April 9, 2009. It was built on 55 acres (220,000 m2) on a 140-acre (0.57-km²) property between Highway 501 and the Intracoastal Waterway on the site of the former Waccamaw Factory Shoppes (the Waccamaw facility's few remaining buildings are used seasonally as a rehearsal location for the Radio City Rockettes) in Fantasy Harbour.
Links: www.freestylemusicpark.com
1,581 views