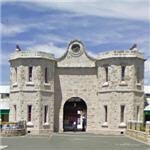 The prison was built by convict labour in the 1850s, and transferred to the colonial government in 1886 for use as a gaol for locally-sentenced prisoners. It closed as a prison in 1991 and reopened as a historic site. It is now a public museum, managed by the Government of Western Australia with daily and nightly tours being operated. Some tours include information about the possible existence of ghosts within the prison. There are also tours of the flooded tunnels and aqueducts under the prison.