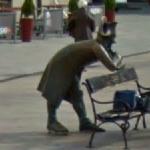 By Mike1989 @ 2012-10-31 04:05:29
@ 48.143315, 17.107935
Bratislava, Slovakia (SK)
Napoleon's Army Soldier is another famous bronze statue in Bratislava. It shows a French army soldier leaning on a bench. Napoleon himself visited Bratislava at the beginning of the 19th century.
A legend says that a wounded French soldier called Hubert fell in love with a local nurse. He started to produce a French Sparkling Wine in Bratislava. Nowadays the most famous sparkling wine in Slovakia is named "Hubert" after this French soldier.