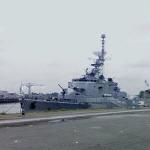 In 1988 she was decommissioned and became a museum ship in Nantes.
Links: en.wikipedia.org
828 views