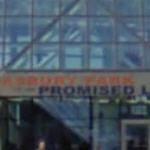 By kjfitz @ 2011-06-09 20:44:47
@ 41.508191, -81.694227
Cleveland, Ohio (OH), US
The Rock and Roll Hall of Fame and Museum has unveiled From Asbury Park to the Promised Land: The Life and Music of Bruce Springsteen. This is the first major artifact-driven exhibit about Springsteen’s legendary career. It is a comprehensive look at his music, from such early bands as Child, the Castiles and Steel Mill through his work with the E Street Band and as a solo artist. The exhibit includes several of Springsteen’s guitars, including the Fender Esquire that is on the cover of Born to Run. It also includes the outfit he wore on the cover of Born in the U.S.A., as well as numerous handwritten lyric manuscripts, posters and handbills from all phases of his career, and various awards and honors. In addition, the exhibit features Springsteen’s 1960 Chevrolet Corvette, which he purchased after the success of Born to Run.
Links: www.rockhall.com
856 views