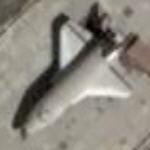 Shuttle Ptichka ("Птичка" meaning "little bird" in Russian) is an informal nickname for the second space shuttles to be produced as part of the Shuttle Buran program. It was never officially named. It is also known as Shuttle 1.02. It is distinguisable from the other shuttles as a red framework is attached to its roof.

"Ptichka" was also an informal nickname for all of the space shuttle orbiters. However, the formal theme for the whole orbiter project was "Stormy Weather" and "Burya" ("Буря" meaning "tempest" in Russian) was mentioned as a likely name for the spacecraft.

Construction of the second orbiter started in 1988, and although the orbiter was closest to being completed of any of the Buran shuttles (after the Shuttle Buran), it was never finished. The program was officially canceled in 1993, at which point the shuttle was 95-97% complete.
Links: en.wikipedia.org
3,530 views