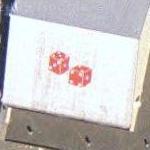 The heritage of the 90th "Pair O'Dice" Fighter Squadron dates back to early 1917 when it was organized as the 90th Aero Squadron on 20 August 1917 at Kelly Field, TX. It has changed names several times from the original 90th Aero Squadron to the current name, as have the missions.

The dice have been part of the squadron's heritage since World War I. However, the pair of dice was officially adopted on February 24, 1924. Captain William G. Schauffler created the dice emblem while at Ourches, France. The squadron could not pick an emblem until then because it had to see at least three months of combat. Whatever the dice came up, they always equaled seven. Captain Schauffler thought this was appropriate because it symbolized the good fortune of the 90th Aero Squadron which lost very few casualties and only one aircraft.