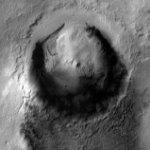 The Curiosity rover is a robotic, car-sized rover exploring Gale Crater on Mars. The Curiosity Mars rover carries a radioisotope-powered mobile scientific laboratory and is part of NASA's Mars Science Laboratory (MSL) mission by the United States. The MSL mission has four main scientific goals: investigation of the Martian climate, geology, and whether Mars could have ever supported life, including investigation of the role of water and its planetary habitability. Curiosity carries the most advanced payload of scientific equipment ever used on the surface of Mars.[6] It is the fourth NASA unmanned surface rover sent to Mars since 1996.
Links: www.google.com
536 views