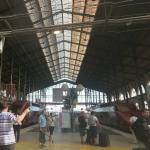 By kjfitz @ 2013-09-04 20:41:50
@ 48.880486, 2.355188
Paris, France (FR)
Paris Nord (or Gare du Nord, "North Station", pronounced: [ɡaʁ dy nɔːʁ]) is one of the six large terminus stations of the SNCF mainline network for Paris, France. It offers connections with several urban transportation lines, including Paris Métro, RER and Buses. By the number of travelers, at around 190 million per year, it is the busiest railway station in Europe and outside Japan.

Gare du Nord is the station for trains to Northern France and to international destinations in Belgium, Germany, the Netherlands, and the United Kingdom. The station complex was designed by the French architect Jacques Hittorff and built between 1861 and 1864. It is situated in the 10th arrondissement of Paris.
Links: en.wikipedia.org
1,790 views