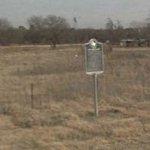 Acknowledged world leader in petroleum conservation. A third generation Texan, born here in Alvord. Left college to enter service in World War I, earning a battlefield commission as lieutenant colonel - at the time the youngest in American army. In 1930 gained national acclaim as crusading mayor of Amarillo. Appointed (1932) to Texas Railroad Commission, served by election until 1966. From prior career of lawyer-hotel owner, he stepped into public duty which sent him at once into East Texas during the world's greatest oil boom, to enforce proration. At peril of his life, he shut off non-complying wells and made the petroleum industry respect Texas laws. He became a pioneer in conservation practices. With prompting from President Franklin Roosevelt, he led in 1934 in founding of the Interstate Oil Compact Commission. In Paris in 1937, he represented the United States at the World Petroleum Congress. By presidential order he was returned to Texas by the army in World War II, to insure oil supplies for allied military forces. He was awarded American Petroleum Institute Gold Medal for distinguished achievement, in 1951. As an international authority on oil - a key to world trade - he had great influence on the course of history.
Links: en.wikipedia.org
446 views