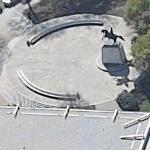 The National Park Service is proud to be the steward of monuments along Virginia Avenue to commemorate Spanish General Bernardo de Galvez, ally to the American colonies during the American Revolution, and four South American heroes, Simon Bolivar, Jose de San Martin, Benito Pablo Juarez, and Jose Gervasio Artigas. All five statues were memorial gifts to the people of the United States from the people of Spain, Venezuela, Argentina, Mexico and Uruguay to recognize these liberators of Bolivia, Columbia, Ecuador, Peru, Venezuela, Argentina, Mexico, and Uruguay. These memorials celebrate the bonds between our nations; and while American Latinos have the opportunity to trace their ancestry back to these origins, there is no permanent historical context in Washington, D.C. that provides an opportunity to focus on the significant cultural events and contributions representing these citizens of the United States.
Links: www.doi.gov
654 views