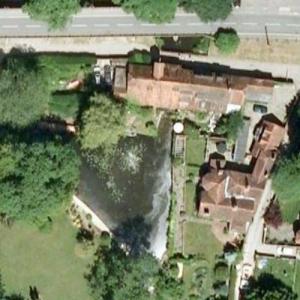 By DonMartini @ 2006-08-19 07:59:05
@ 51.522538, -1.140247
Goring, United Kingdom (GB)
George Michael and his partner Kenny Goss lived in a 16th century house about an hour outside of London. Located on the Thames River, it's a beautiful property with a large garden. Michael was an English singer, songwriter, record producer, and philanthropist who rose to fame as a member of the music duo Wham! and later embarked on a solo career. Michael sold over 80 million records worldwide making him one of the best-selling music artists of all time. He achieved seven number one songs on the UK Singles Chart and eight number one songs on the US Billboard Hot 100. He was widely known for his success in the 1980s and 1990s, including Wham! singles such as "Wake Me Up Before You Go-Go" and "Last Christmas" and solo singles such as "Careless Whisper" and "Faith".

Michael formed the duo Wham! with Andrew Ridgeley in 1981. The band's first two albums, Fantastic (1983) and Make It Big (1984), reached number one on the UK Albums Chart and the US Billboard 200. Michael's first solo single "Careless Whisper" reached number one in over 20 countries, including the UK and US. Michael's debut solo album, Faith, was released in 1987, topping the UK Albums Chart and staying at number one on the Billboard 200 for 12 weeks. Four singles from the album--"Faith", "Father Figure", "One More Try", and "Monkey"--reached number one on the Billboard Hot 100. Faith was named Album of the Year at the 31st Grammy Awards. Three years after the release of Faith, Listen Without Prejudice Vol. 1 (1990) was released; that album included the Billboard Hot 100 number one "Praying for Time". "Don't Let the Sun Go Down on Me", a 1991 duet with Elton John, was also a transatlantic number one.

George Michael has a net worth of $200 million. Tragically, George Michael died on December 25, 2016 at the age of 53 at his home outside of London. He reportedly died of heart failure.
Links: en.wikipedia.org, www.bbc.com
61,677 views