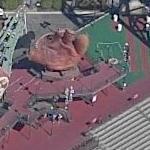 Jack Bair never dreamed that the funky old baseball glove he played catch with as a kid -- a 1940s Wilson his father used as a boy -- would one day inspire the humongous glove looming above the left-field bleachers at the Giants' new Pac Bell Park.

One can understand the temptation to touch the jumbo glove that looks so much like aged leather. It was designed by Ron Holthuysen of Berkeley's Scientific Art Studio. His 15-member crew included eight artisans who spent months hand-sculpturing epoxy for the glove's intricate webbing, creases, cracks and knots.

Those textural details were largely replicated from Bair's old four-fingered glove -- four fingers and a thumb -- which was photographed and viewed through a microscope. But the form of the giant glove is actually based on a 1927 three-fingered model that Holthuysen bought for $15 at Urban Ore in Berkeley, just around the corner from his West Berkeley studio.

The 1927 glove was sent to a company in Los Angeles called CyberFX, which scanned it into a computer to create a 3-D model. While San Francisco structural engineer Dick Dreyer of Culley and Associates was designing the steel frame, CyberFX used a computer-driven router to make a gigantic replica of the glove in polyurethane foam.

The router poured out large chunks of foam that were used to shape the fiberglass. The foam was then removed from the shells, which were trucked up and assembled on the steel frame along the East Bay waterfront. Then Holthuysen's crew used 2,000 pounds of epoxy to form the details. They first did the big knots in clay, cast them in epoxy using plaster molds, then mounted them on the glove with steel rods. The stitching was made with inch-thick marine rope. Holthuysen can't confirm rumors that some of the female artisans on the project stuffed panties into the glove's fingers. ``I read that in the newspaper,'' says the artist, a Dutchman with a typically dry Dutch sense of humor. ``I never checked it out myself. In Holland you can ask these things, but not in America.''

The big glove was lifted onto a barge with a huge derrick crane and ferried across the bay to China Basin, where it was loaded onto a trailer truck, hauled to the ballpark and lifted in place by cranes.
Links: sanfrancisco.giants.mlb.com
1,267 views