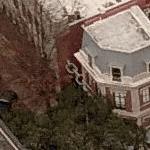 By kjfitz @ 2008-01-25 10:08:48
@ 34.00558272, -81.03523506
Columbia, South Carolina (SC), US
Sky conceived and installed "NEVERBUST" in 2000, commissioning and funding the entire project himself. The chain is comprised of true welded steel, with the words "NEVERBUST" emblazoned across the center links. The idea was preceded by Sky's installed exhibit "Space Lace" at the Columbus Museum circa 1972. A chain ten feet in height, "Space Lace" ran vertically and appeared to hold the roof onto the building.

Fearing censorship by the city but with the approval of the owners of both buildings he surreptitiously installed "NEVERBUST" early on a Sunday morning. Because it chains two historic buildings together and hovers over city property, the city of Columbia's Landmarks Commission ultimately held a hearing to determine its fate. It was unanimously approved by the committee due to the artist's international reputation as a mastermind of public art - and because they liked it.

When asked why he put the chain there, Sky replied,
"One building looked like it was leaning a little bit."

Because public safety was a concern of the artist, he hired an experienced professional welder, Dewayne Rice to implement the welding and install the finished piece. Two thousand pounds of hydraulic pressure were required to complete the linkage.
Links: www.blueskyart.com, virtualglobetrotting.com
804 views