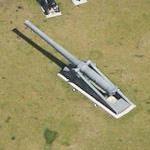 The plaque, next to the gun, reads:

"The Gibraltar Gun is one of the largest and heaviest objects in the Royal Artillery's collection - a 38 foot long coastal defence artillery piece weighing 40 tonnes.

The 9.2 inch calibre gun is a rare surviving example of the large coastal guns installed throughout the British Empire in the early 1900s to counter long-range attacks by enemy battleships and cruisers.

This type of heavy artillery was used to protect strategically important coastal locations throughout the British Empire including Gibraltar where this gun was located for its service life.

The gun was first installed on the Gibraltar coast in 1902 where it remained in service into the 1950s when guns like these were finally replaced by guided missile systems.

In the 1980s, it was found in a Gibraltar scrap yard and was returned to Britain where it was made."
Links: en.wikipedia.org
1,872 views