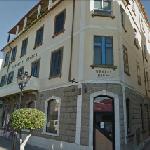 By Mike1989 @ 2012-12-16 03:39:21
@ 36.136528, -5.353144
Gibraltar, Gibraltar (GI)
The Gibraltar Methodist Church is part of the South West District of the Methodist Church of Great Britain. It has a long history associated with the development of British Gibraltar, and it has greatly strengthened its ties with the local population since the scaling down of Britain-based forces in recent years. In 2006 it appointed Fidel Patron - the first-ever Gibraltarian Superintendent Minister.
Links: en.wikipedia.org
513 views