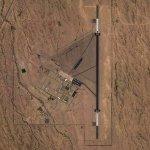 The facility was opened in July 1942 when it was part of the Gila Bend Gunnery Range. During World War II it was under the command of the 492d (Reduced) Army Air Force Base Unit, AAF West Coast Training Center. It served as the range headquarters for a massive bombing and gunnery range, now known as the Barry M. Goldwater Range, and for maintenance of the range and range targets. It remained an active Air Force facility until approximately 1995. It was also used as an auxiliary landing field. As of 2011, this is handled by private contractors utilizing portions of the former facility.
Links: en.wikipedia.org
1,162 views