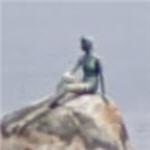 By kjfitz @ 2009-10-29 12:10:08
@ 49.302382, -123.12634
Vancouver, Canada (CA)
A life size bronze statue of a woman in a wetsuit, with flippers on her feet and her mask pushed up on her forehead, sits on a large intertidal boulder just offshore of Stanley Park. In September of 1968, Douglas Brown, a Vancouver lawyer, talked to sculptor Elek Imredy about his desire to commission a sculpture inspired by the famous Copenhagen mermaid, which could be sited on the great granite boulder just off the northern shore of Stanley Park. Imredy proposed a life-size bronze sculpture of a scuba diver. On Brown's initiative, the Vancouver Harbour Improvement Society was formed with the intention of financing and facilitating a unique landmark for both Vancouverites and visitors to the city. They raised the money to produce the sculpture privately and Imredy was commissioned to craft the proposed work. The Vancouver Park Board gave permission to the society to place the sculpture on the rock. Because the boulder was often covered at high tide, a precast concrete ring was created and the rock was lifted by a floating crane and set on the ring about 100 feet from its original location. Imredy first took a mold of the top surface of the rock. In his studio, he made a replica of the rock and modeled the figure in clay. The model was a young friend but Imredy didn't want to make a recognizable image. "When I couldn't get the model to hold her hand the way I wanted it... I held my left hand in front of a mirror, showing its opposite, and I modeled right one. Of course, I made it a bit nicer, with longer fingers." A plaster of paris mold was made from the clay figure and the sculpture was cast in fibreglass. This fibreglass figure was flown to Rome where it was cast in bronze at Giovanni and Angelo Nicci's foundry. On June 9th, 1972, the sculpture was set in place by an electric crane reaching out from shore to the rock 8o feet away and fastened to the stone with stainless steel bolts. The next day the sculpture was ceremoniously unveiled. "Girl in Wetsuit" has become a landmark for visitors to Stanley Park and to boats that enter the harbor.

"I didn't believe we should have a copy of the mermaid (in Copenhagen harbor). She is rightfully a symbol of Copenhagen... I proposed to have a life-size scuba diver seated there. At that time scuba diving was getting quite popular here in Vancouver and, just as important, I didn't know of any similar sculpture anywhere in the world. It was a new idea… There was tremendous opposition and great controversy. I still don't know why.." (quoted in The Sculpture of Elek Imredy by Terry Nobel (publisher, Vancouver, 1993) "The sculpture (is) a symbolic figure of the future exploration of the continental shelf." (information provided by the artist) "She represents Vancouver's dependence on the sea and the necessity to use the sea for the benefit of all." - Peggy Imredy
Links: vancouver.ca
691 views