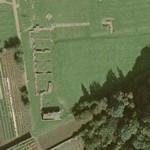 An Augustinian community, the priory was largely destroyed in the Dissolution of the Monasteries and the stones from it were used in other buildings in the town including Saint Nicholas' Anglican church. The east end was left standing with its large window forming a distinctive arch shape, a well-known landmark which is often used as a symbol of the town.
Links: en.wikipedia.org
487 views