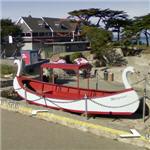 The interpretive sign in front of the boat states:

"These boats were first introduced here at Lovers Point in the early 1890's. Launched from the narrow cove's wooden pier, the boats offered passengers a canopied window to the underwater flora and fauna around Lovers Point.

Nathaniel Roscoe "Dad" Sprague owned and operated a small fleet of these boats for 50 years. His son Russell took over the concession in 1948. Later, the boats operated under a variety of owners until the mid 1970's."

This replica boat was designed by Monterey Bay Boatworks' master boatbuilder Frank Siino and fabricated by welder Gary Goulart to echo Sprague's early boats. The swan heads - salvaged from the last of the original boats and donated by Realtor William Smith - were restored by maritime historian Tom Fordham. Christened the Margruss (after Margaret and Russell Sprague) in 1997, it was placed here in 2008 by the Heritage Society of Pacific Grove to commemorate the strong hold the glass bottom swan boats have on our memory."
Links: www.waymarking.com
627 views