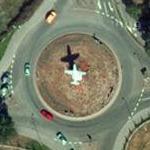 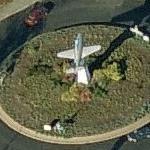 In 1946, the first prototype (Serial W4041) was placed in the Science Museum in Central London, where it is still exhibited. A full-size replica has been placed on an obelisk on a roundabout near the northern perimeter of Farnborough airfield in Hampshire as a memorial to Sir Frank Whittle. A similar full-size model is on display in the middle of a roundabout at Lutterworth in Leicestershire (pictured below) where the aircraft's engine was produced.
Links: en.wikipedia.org
811 views