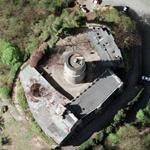 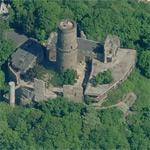 By DonMartini @ 2006-04-07 12:07:16
@ 50.685869, 7.150717
Bad Godesberg, Germany (DE)
The Godesburg is the first fortress in the big series of the fortresses in high altitude at the romantic Middle Rhine. It is located on a mountain peak, which had been a Roman and later on a Frankish cult site. Since the times of christianising the holy St. Michael has been venerated here, whose holy shrine had to disappear in 1210 due to the erection of the fortress, but was re-established at the north side of the mountain. In the Middle Ages, the fortress was a popular place of the electors of Cologne. In the Sewer War against the Cologne-based Elector Gebhard Truchseß zu Waldburg, who changed to reformation, the fortress was blasted in 1583. A part of it – the “Bergfried”, the highest part of the fortress -, was maintained though. Today, the Godesburg appears as a picturesque ruin in numerous pictures regarding the “Romantic Rhine”. It was restored with style in 1960 and equipped with a hotel and a restaurant. The St. Michael Chapel was supplemented by a long house from 1697 – 99 and has a magnificent Baroque stucco decoration. As the oratorio of the St. Michael order it was equipped in a rich way. On the occasion of a visit to the Godesburg you should take a look at the historical fortress cemetery at the foot of the mountain, which is the so-called pendant to the old cemetery (“Alter Friedhof”) in Bonn.
1,040 views