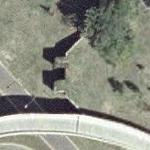 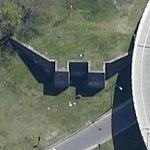 The Godey Lime Kilns at 27th and L streets NW, just a few yards from Rock Creek Parkway under the K Street overpass, were once part of a major industry in Washington. Two of the five stone-and-brick kilns survive.

In 1864 William H. Godey founded Godey Lime Kiln Co. His firm used limestone from quarries near Seneca and brought it to the kilns via the C&O Canal. The limestone then was fed into the top of each kiln's chimney at night. The resulting lime would be raked out the following morning.

The Godey family made a fortune from the lime business because the growing capital city had a voracious need for building materials. By May 1906, however, its fortunes had declined, and Godey's was running ads to rent out its property. The company finally closed in 1908.

The kilns' location used to be marked by a plaque on a small boulder. The plaque is now missing, leaving only a rectangular stain behind. The stone and brickwork on the surviving kilns is crumbling in places and could use some restoration.
Links: planning.dc.gov
1,141 views