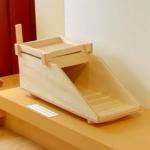 The inside bottom of the box is lined with riffles and a usually a carpet similar to a sluice. On top of the box is a classifier sieve (usually with half-inch or quarter-inch openings) which screens-out larger pieces of rock and other material, allowing only finer sand and gravel through. Between the sieve and the lower sluice section is a baffle, which acts as another trap for fine gold and also ensures that the aggregate material being processed is evenly distributed before it enters the sluice section. It sits at an angle and points towards the closed back of the box. Traditionally, the baffle consisted of a flexible apron or "blanket riffle" made of canvas or a similar material, which had a sag of about an inch and a half in the center, to act as a collection pocket for fine gold. Later rockers (including most modern ones) dispensed with the flexible apron and used a pair of solid wood or metal baffle boards which. These are sometimes covered with carpet to trap fine gold. The entire device sits on rockers at a slight gradient, which allows it to be rocked side to side.
Links: en.wikipedia.org
823 views