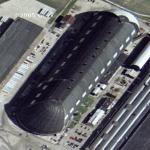 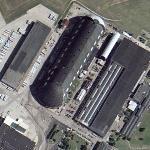 By nic @ 2005-04-16 19:02:16
@ 41.032627, -81.470618
Akron, Ohio (OH), US
A dirigible hangar constructed in 1929, and said to be the largest airdock in the country, and the largest unsupported enclosed space in the country (it used to be "in the World," until a German company built a huge airdock a few years ago). It is1,175 feet long, 325 feet wide and 211 feet tall. The airship USS Macon was built inside, and though the Macon was stationed at Moffett Field, in California, the hanger built for it there is said to have been built a few feet shorter than Akron, out of respect for Akron's record. Airships of that size were not in service long (the Macon lasted a year or so before it was destroyed in a storm off the coast of California), and the Akron hangar has been used mostly for miscellaneous aircraft engineering projects, and storage, by Loral Defense Systems, which acquired it when Loral bought Goodyear Aerospace in 1987, and later by Lockheed, with bought the division from Loral. The Department of Defense is still interested in small dirigibles as a means of maintaining surveillance aloft, a role currently performed by vehicles such as AWACS planes, which have to be constantly refueled to stay afloat. At numerous sites the Air Force uses tethered blimps as radar facilities.
Links: clui.org
2,705 views