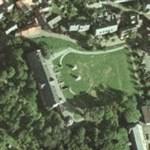 By DonMartini @ 2007-09-25 03:02:13
@ 51.902964, 10.4261
Goslar, Germany (DE)
11th century Romanesque palace at the foot of the Rammelsberg, the emperor's treasure. Between 1005 and 1015 Heinrich III transfered the imperial palace from Werla to Goslar Out of it Konrad II and Heinrich II created "the most famous dwelling in the Empire" A total of 23 Imperial Diets were held here. The heart of Heinrich III lies buried beneath a stone memorial slab in St. Ulrich's Chapel. Restoration work carried out (1879-97) under the direction of Prof H. Wislicenus includes the ornate painted finish of the Imoerial Hall.

In the ground floor vaults of the Kaiserpfalz, an exhibition depicting the history of the wandering imperial court as well as the changing destiny of the emperor and his palatinate is on show. Exhibits present the Romanesque and Gothic architecture in an informative way.
Links: en.wikipedia.org
776 views