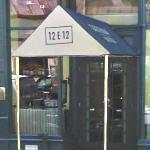 By Parabellum @ 2010-11-21 09:05:27
@ 40.734231, -73.993735
New York, New York (NY), US
The story of Gotham Bar and Grill is one of seeming contradictions that, to the delight of discerning diners, make surprisingly perfect sense: Sophisticated cuisine with mass appeal; knowledgeable service that’s never stuffy or pretentious, and a persistent creativity, energy, and popularity that make Gotham feel like each season’s hottest new opening, even though it’s been at the forefront of New York’s dining scene for a quarter of a century.

Of course the cornerstone of any restaurant is the food, and Chef Alfred Portale’s cuisine has lured diners to Gotham for twenty-five years, and influenced the culinary scene far beyond the restaurant’s walls. One of the driving forces behind modern American cuisine, Portale helped revolutionize the way Americans dined in the 1980s—thoughtfully breaking with French conventions, calling on previously unfamiliar ingredients from around the world, and exhibiting a fierce devotion to seasonality—and to this day consistently drives himself to create new, of-the-moment dishes that keep the Gotham experience fresh and exciting year after year.
Links: www.gothambarandgrill.com
680 views