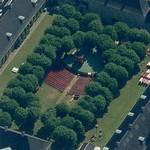 Theater was founded by a group of actors who were trained from the actors school at the Odense Teater, namely Christian Steffensen, Søren Sætter-Lassen and Lars Liebst. During the time a student had played the Holberg-play "Henrik and Pernille". They got the urge to repeat the success, which they did in the Danish Museum of Art & Design to which the theater is named after. Lars Liebst was theater director until 1996, when he was followed by Klaus Bondam. Since 2003, Steen Stig Lommer has been theater director.

Since 2001 Grønnegårds Theater has been one of the small city theaters in Copenhagen, but the theater is also supported by a number of companies and foundations. The theater is known for its summer shows, since 1993 only consisted of Holberg-plays. Since then, the theater listed interpretations of Shakespeare, Molière and Marivaux, and newer pieces, for example. Nikoline Werdelins "Natmandens Datter" from 2006, which became the largest audience success to date for the theater.

The theater behaved 1987-1993 also works in Ridehuset at Christiansborg, including Svend Åge Madsen's Dødens Theater (1987), as in 1994 and 1995 made the Christmas performances of Charles Dickens in the Tivoli Glassal. In 2007, Holberg's theater-classic "Erasmus Montanus" was played.
Links: groennegaard.dk
426 views