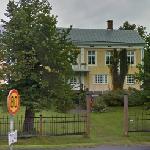 The house is in Swedish mansion style. Its shell is made of logs and the facade of wooden deals, on top of birch bark. It remains on the same location as where it was built. The year of construction and first owner of the mansion are not known, though it is assumed that it was built around 1780, for an associate judge of appeal in Vaasa, Johan Casimir de la Chapelle.

At the mansion observations have been made of what is said to be ghosts, including a White Lady, the identity of whom is unknown.
Links: en.wikipedia.org
364 views