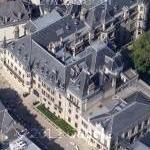 Formerly the first town hall of the city occupied the site of the present palace; destroyed by a gunpowder explosion (1554), the town hall was rebuilt 20 years later. In the middle of the 18th century the former City Scales were added as an extension, whereas the Chamber of Deputies was built as an annex in 1859.