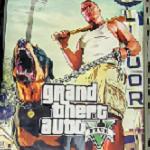 By Mike1989 @ 2013-03-20 15:53:58
@ 46.866208, -71.269716
Charlesbourg, Canada (CA)
Grand Theft Auto V, commonly shortened to GTA V, is an upcoming open world action-adventure video game being developed by Rockstar North in the United Kingdom and published by Rockstar Games. The game will be the first major title in the Grand Theft Auto series since Grand Theft Auto IV (2008), and a continuation of the fictional universe that was introduced in that game. The 15th game in the series overall, GTA V is to be set in fictional Los Santos in the state of San Andreas and its surrounding areas, based on modern-day Los Angeles and Southern California. A rendition of Los Santos was previously featured as one of three cities in Grand Theft Auto: San Andreas, released in 2004.
Links: en.wikipedia.org
417 views