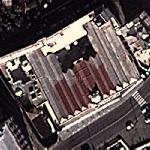 By Mike1989 @ 2013-04-04 23:30:28
@ 36.785277, 3.064349
Algiers, Algeria (DZ)
The Great Mosque of Algiers (Arabic: الجامع الكبير‎, Jemaa Kebir) or “Djama’a al-Kebir” (meaning Great Mosque) is a mosque in Algiers, Algeria, located very close to Algiers Harbor. An inscription on the minbar منبر) or the pulpit testifies to fact that the mosque was built in 1097. It is also known by several other names such as Grand Mosque d'Alger, Djamaa al-Kebir, El Kebir Mosque and Jami Masjid. It is one of the few remaining examples of Almoravid architecture. It is the oldest mosque in Algiers and is said to be the oldest mosque in Algeria after Sidi Okba Mosque. It was built under sultan Ali ibn Yusuf. Its minaret dates from 1332 (1324 in some sources) and was built by the Ziyyanid sultan of Tlemcen. The gallery at the outside of the mosque was built in 1840. Its construction was a consequence of a complete reconstruction of the street by the French.
Links: en.wikipedia.org, en.wikipedia.org
420 views