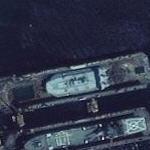 The Russian designed Zubr or Project 1232.2 class (NATO reporting name Pomornik) is the world’s largest military hovercraft and serves as a Landing Craft air-cushion (or LCAC). Note that the Bora is bigger but has side walls so it is not considered a true hovercraft because some of the side structure is in the water.

Zubr is designed to sealift landing assault units (such as marines or tanks) from equipped/non-equipped vessels to non-equipped shore, as well as transport and plant mines.
Links: en.wikipedia.org
4,039 views