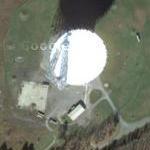 Major radio astronomy site, with numerous large dish antennas. One of the three major facilities for the National Radio Astronomy Observatory, along with the Very Large Array near Socorro, New Mexico, and a group of ten dishes distributed from the Virgin Islands to Hawaii known as the Very Long Baseline Array. The Green Bank Telescope, the largest fully-steerable radio telescope in the world, was dedicated in 2000 and replaces a 300-foot telescope that collapsed in 1988. Facilities also include the Tatel Telescope, used in 1960 for the first-ever Search for Extraterrestrial Intelligence (SETI). Headquarters for the NRAO is in Charlottesville, Virginia.
Links: wwwlocal.gb.nrao.edu
2,874 views