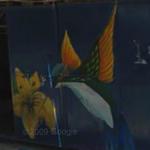 The history of the school, that has as a symbol the hummingbird (which in Portuguese is called Beija-flor), could be divided into two historical parts: after and before Joãosinho Trinta. Joãosinho Trinta took on the school in 1976 with the samba-enredo (plot) in honor to the jogo do bicho (illegal type of gambling in Brazil). The parades signed by him became so anthological that even when he did not win he left a mark in the avenue. That is what happened in 1989 when the school, known by its luxurious rows and floats, surprised the public with the plot Ratos e urubus, larguem a minha fantasia ("Rats and vultures, release my clothes") bringing to the Sambódromo cars and rows full of trash, beside the famous covered Cristo Redentor. It was on that year that Beija-Flor became vice-champion, but Joãosinho was considered by some people the righteous champion of the parade.
Links: en.wikipedia.org
622 views